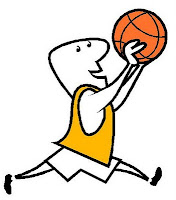 For the first time ever, I completed an NCAA bracket for March Madness.  No, I’m not a college basketball buff (though I do know that the Maryland Terrapins took home the title in 2002…but that’s only because I was a student there at the time).  In fact, I was invited to complete a bracket on ESPN.com by my five year old nephew, or more accurately, my brother-in-law on behalf of my five year old nephew.  He thought it would be a good way for my nephew to learn about the game and have others involved in the process.  (Note: My nephew is quite well versed in all things sports and recently explained to me what a two point conversion is in football as I had never heard of it before…apparently, I’m not a sports buff at all.)

I took a look at the teams and quickly determined that I was going to select Ohio State to win the whole thing.  I didn’t really have a good reason for that determination…but so far, it seems to be working in my favor.  It was filling out the rest of my bracket that would prove to be difficult for me.  It turns out that the NCAA Bracket maven in my family is my 8 year old niece who I doubt has ever seen a college basketball game, except for when her dad and brother commandeer the television in the family room.  If one were to compare my bracket and her bracket side by side they would notice one thing right away…hers has a lot more green.  One would also notice that she is in the 96th percentile, while I’m holding steady at 47.8 percent.

You’re probably wondering right about now what the NCAA Bracket has to do with Areyvut or why I am even mentioning it in this blog.  Well, over the last week or so I have learned that NCAA teams competing for the National Championship are a lot like nonprofit organizations.  There are often going to be those teams that seem as though they are on par with one another and once in a while a school with less athletic recognition will pull off an upset…but each has its staunch supporters, always wanting to see that individual school succeed.  The same holds true for nonprofit organizations, and Areyvut in particular.  As a smaller organization, it is easy to view us as a Hampton University (lost in the first round to Duke)…but we hope you’ll give us a shot…you never know, we may surprise you and become your Morehead State.